Sexual Violence in Egypt: Can Men Protect Us?

Many of the so-called revolutionaries thought it was not the right time to talk about gender equality, that women gain rights as the political struggle proceeds, and that the gender-related issues raised are pushed by western-liberal propaganda. Many times, I thought the incidents of sexual harassment in Egypt were exaggerated or too few.
When I first read reports on ‘gang rape’ in Tahrir square last year, I dismissed them thinking they are only rumors by the many weird Egyptian websites and ‘yellow newspapers.’ In the past few months though, Egyptian women screamed loudly enough to mobilize themselves and others around the world to protest sexual violence.
Last year, the anti-sexual harassment march was attacked in Cairo and it was discouraging to organize another one. This year, harassment is no longer the appropriate word because it is rightly replaced with sexual violence as we see videos of gang rapes happening on the margins of massive marches.
Weeks ago, Egyptian blogger Wael Abbas tweeted a scene of Egyptian women getting searched before entering the book fair. Many of them turned in knives; a scene that tells us about the kind of reality Egyptian women have adapted themselves to. Shortly after, we saw women marching with knives in Cairo threatening to play the game of violence if necessary.
Read more »
Posted by Mona at 3:50 PM No comments: 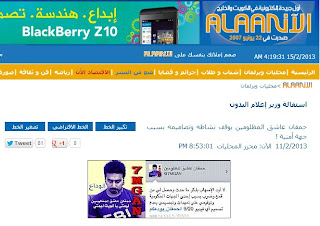 A video blogger known for documenting violence against stateless protesters in Kuwait has quit, writing on Twitter that authorities beat and coerced him to do so.
Under the nickname “حمقان البدون” meaning the “Angry Bedoon“, (Arabic for stateless), the blogger made a name for himself in his community for using footage of violence by riot police against stateless protesters to make videos on YouTube subtitled in English. Many of his videos were used by TV channels, being the only footage available documenting violence against stateless protesters.
His story was first reported by Alaan online newspaper with the title “The Bedoon's Minister of Information Resigns.” The move comes nearly three months after the arrest of activist Abdulhakim al-Fadhli, who is currently on hunger strike.  Al-Fadli has been sentenced to two years in jail for using Twitter to organize and mobilize protests.