The Question of State-Feminism in the Gulf

The question of how the Arab uprisings have and will affect the lives and rights of women in the region is particularly significant in the Arab Gulf states.
Women in this part of the region find themselves faced with two challenges: the efficiency of state-driven feminism on one side, and their struggle to push for their rights in the public arena on the other. Both the state and social forces often fail to prioritise women's rights with the result that women are compelled to negotiate their rights within these two spheres.
In Kuwait, educated women of the upper and middle classes have fought for decades for their rights to vote and to run in parliamentary elections. In 2005, they were granted those political rights despite opposition from Islamists. Throughout their struggle, those activists recognised the state as their supporter.
Read more »
Posted by Mona at 3:02 PM 1 comment:

The Gulf-West Alliance and Dehumanizing Bahrainis: A Conversation With Ali Abdulemam 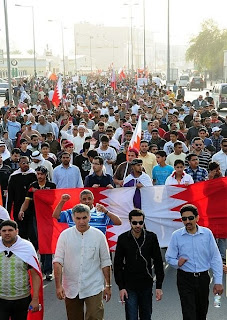 Ali Abdulemam is a Bahraini blogger whoseBahrain Online Forum was blocked in his country. For his activism, Abdulemam was imprisoned in 2010 and tortured. In an attempt to calm the protesters of the February 14 movements, the Bahraini regime released Abdulemam. He immediately resumed his activism, calling for the end of the regime during the 2011 Pearl Roundabout protests. When the Saudi-led forces of the “Peninsula Shield” invaded Bahrain, he went into hiding to avoid living the nightmare of imprisonment and torture once again. When tried in absentia, he was sentenced to fifteen years in prison for “attempting to overthrow the regime.” Last May, Abdulemam arrived in London after being smuggled across the Bahraini-Saudi border. What follows is an interview with the activist on how he sees political developments and online activism in Bahrain.

Since you escaped from Bahrain, we have been reading heroic scenarios about you “gaining freedom.” Do you feel free?
To me, freedom does not mean exiting through that brown door that I was trapped behind during my time in hiding. Freedom has a more complex definition: to be able to object; to oppose; to think and move freely; and to be myself and not someone else. I could have been free in Bahrain, with a comfortable job, but I would not have been myself. I would be the person that the regime wants me to be and the person that the economic, political, and media elites want me to be. I, however, do not feel free because Al Saud occupies my country, and the regime—with regional and global support—has conspired against its people. My real freedom would come when Bahrainis have the freedom and ability to make their own decisions.
Read more »
Posted by Mona at 2:58 PM No comments:

O Stones, Listen to the Music

[Riyadh Alsalih Alhussain (1954-1982) was born in the Syrian city of Dara’a on March 1954 to a poor family. Growing up as a deaf-mute, he struggled with his education and decided to quit school. He worked as a journalist from 1976 until his death in Damascus in 1982. He published three poetry collections and this poem is from his third collection “Simple as Water, Clear as a Bullet.” (Basitun kal-Ma’, Wadihun Katalqat al-Musaddas)]