In the past few weeks, 200,000 undocumented immigrants were deported from Saudi. Arrested in raids, left to sleep in the open air, piled in front of migration offices, and shown every kind of discrimination and abuse, those immigrants continue to be deported by the country that is home to King Abdullah’s Interfaith Dialogue Center.
Simultaneously, Kuwait follows its “big sister,” deporting hundreds in the past few weeks. Pictures of those migrants are taken without their permission, while policemen pose proudly as they fulfill their national duties. Racism is a living legacy in the Gulf, softened by Western powers and overlooked by media that would prefer to cover the story of a handsome man being deported from Saudi rather than those of the tens of thousands deported.
* Continue reading this article in AlAkhbar
Posted by Mona at 12:15 PM No comments: 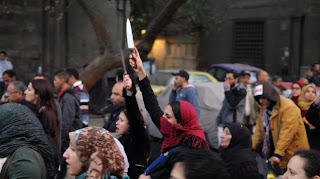 Since the first days of the Egyptian revolution, sexual harassment was a focus for Western media. Although the issue is important, it was dismissed and denied for a long time in Egypt. Yet a lot has happened since last year, with more activism and work being done in that regard. Egypt finally acknowledges the existence of this phenomenon and the denial of the state is no longer effective as women go on TV and narrate their stories as victims of harassment or rape.
When it comes to Egyptian women, the state often blames them for the sexual violence. They are asked to fit the mold of an “ideal” woman, one removed from public and political spaces. When football Ultras were protesting against the military junta, they segregated women from men and commanded women not to smoke cigarettes. Those football Ultras, who are foolishly called “the revolutionary army,” represent just one of the macho faces of society.
With foreign women living in and visiting Egypt, the equation differs to some extent. Egypt is now not only promoted as a country that provides zero security for tourists, but also as a misogynist space. The 99 percent figure keeps coming up in the conversation on sexual harassment in Egyptian streets. This is a street-phenomenon that keeps growing as the state ignores it and blames it on women. It is also a complicated performance of masculinity.